Donate now
and support about 25.000 subscribers
Home / Chapel and Rectory

With the opening of the temporary chapel on the site of the former Garrison Church on June 25th, 2011, a new place of interest has been created for Potsdam. The chapel is located right behind the past and future Garrison Church. Its glass façade enables a clear view of the groundwork, the future construction site and the brick arch with its Cross of Nails.

In 2011, the Protestant Church Berlin-Brandenburg-schlesische Oberlausitz (EKBO) decided on the formation of a rectorate. The position was filled by priest Juliane Rumpel. In 2014, Priest Cornelia Radeke-Engst has been assigned to the rectorate, which is co-financed by the Kirchenkreis Postdam, the Stiftung zum Wiederaufbau der Garnisonkirche, and the Fördergesellschaft.

The Nagelkreuzkapelle is home to a symbolic parish, which is open to everyone, regardless of their affiliation with a church or their belonging to other parishes. The profile of this parish is devoted to the triad remembering history, learning responsibility and living reconciliation. If you would like to become a member, simply get in touch with us. This does not affect your affiliation with your home parish, of which you will continue to be a member.

Municipal events such as lectures, panel discussions and talks deal with the changeful history of the old Garrison Church. We rememberhistory to learn for the present and the future. This learning process is shaped by youth projects, face-to-face encounters and seminars under the guiding principles of reconciliation and peace. As a symbolic parish, we live the Christian faith.

Church services of different formats are held Saturdays and on religious holidays at 6PM in the Nagelkreuzkapelle.

We also offer Glaubenskurse (faith seminars), which are open to everyone who is interested in learning about the Christian faith or about deepening their own faculty of speech in regards to the passing on of their Christian faith. In addition, we offer ‘Cross of Nails’ services and services on the occasion of commemoration days. We also invite everyone to join us for academic services and meditations.

We look forward to welcoming you!

The Pfarramt will be staffed soon.
Please contact Matthias Kasparick regarding
questions or other information. 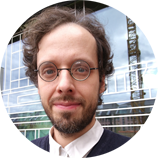